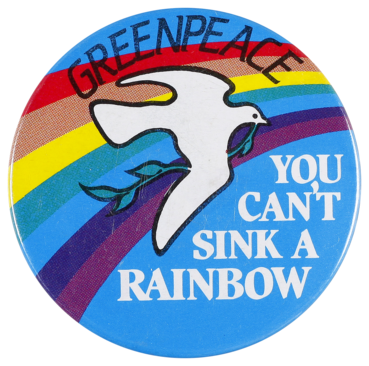 This badge was produced by People for Nuclear Disarmament (PND), one of Australia’s oldest peace groups. Founded in 1960, the group is committed to non-violent action in its quest for social justice in the local, national and global arenas.   PND believes nuclear weapons, nuclear power and nuclear research industries are interlinked. It opposes all aspects of the nuclear industry, including uranium mining, weapons testing, the construction and operation of nuclear reactors, and the irradiation of food. One of its campaigns helped to influence the United Nations in 2007 to adopt a Resolution calling for immediate steps to take nuclear weapons systems off ‘high alert’ status. The PND believed that reducing the operational readiness of nuclear weapons would also reduce the risk of the weapons being used unintentionally or accidentally.

The donor of the badge, John Ellis, writes:

I became involved with the anti-nuclear movement through my association with anti-war activism during the Vietnam War. The development of nuclear weapons had become very much a part of the twentieth century arms race, as seen by the dropping of atomic bombs on Hiroshima and Nagasaki. These acts I considered a crime against humanity. I also objected to the development of nuclear power for safety and environmental reasons such as those experienced at Chernobyl.

My peace activism began when I was a young man and continues to this day. When wearing the badge, it was a connection with other peace activists.