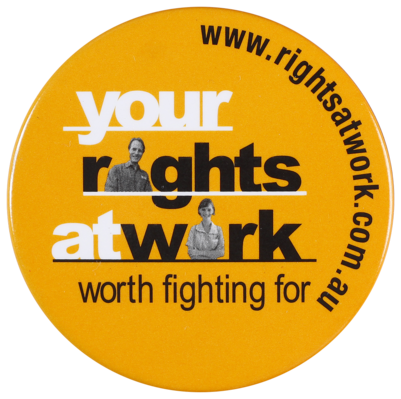 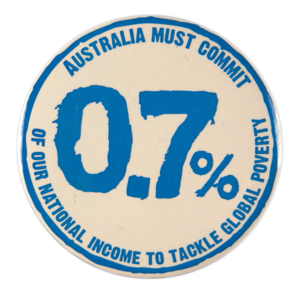 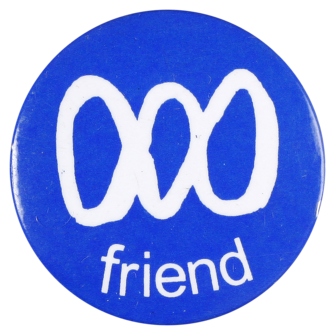 This badge shows support for the Millennium Development Goals, eight targets to halve extreme poverty worldwide by 2015. The Goals aim to eradicate hunger, lack of adequate housing, income poverty and social exclusion. They also promote healthcare, universal primary education, gender equality and environmental sustainability. The figure of 0.7% refers to the amount of gross national income (GNI) every developed nation needs to commit to foreign aid in order to achieve the Goals and end extreme poverty within a generation.

The Millennium Development Goals were agreed to by United Nations member nations, including Australia, in 2000. But the 0.7% target was first pledged in 1970, when the donor economy was half its current size. The UN believes that after two and a half decades of sustained economic growth, the Goals are affordable and achievable. Since 2000 the target has been re-affirmed in international agreements and calls for practical action. In 2005, UN Secretary-General Kofi Annan urged donor nations to establish timetables to achieve the 0.7% target by 2015, with at least 0.5% to be reached by 2009.

In 2013, Great Britain’s Conservative government became the first donor in the G7 group of industrialised democracies to reach the 0.7% target. It committed to meet the 0.7% target again in 2014. In December 2014 the government of Australia—a nation that ranks higher than Great Britain on several wealth and wellbeing measures—announced that it would make multi-year cuts to the nation’s foreign aid program. The cuts mean Australia’s foreign aid would amount to 0.22% of GNI in 2016–2017. The budget cuts will offset new commitments in defence and national security.