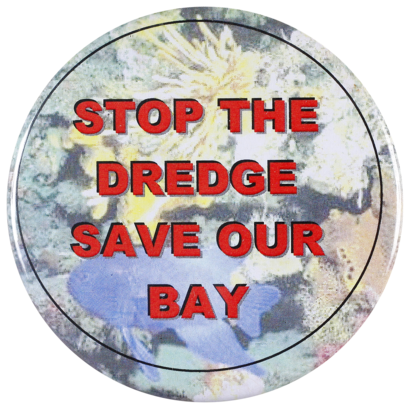 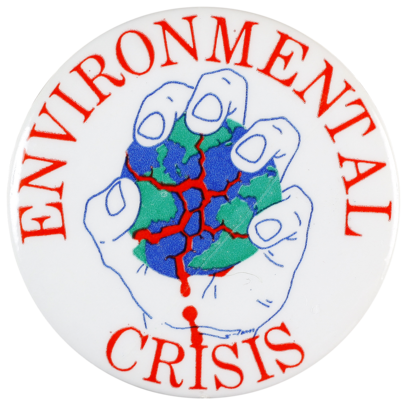 Stop the dredge, save our bay

In February 2008 the Port Phillip Channel Deepening Project commenced dredging operations to deepen the channels leading to Melbourne in order to provide greater access for larger container ships. Opposition to the dredging centred upon the possible long-term impacts to the marine environment.

Between 2004 and 2008 community group Blue Wedges held rallies and pickets, using kayaks, surf boards, boats and yachts, to block the progress of the dredging ship Queen of the Netherlands. Although the project was delayed for a short time, Blue Wedges was ultimately unsuccessful. The project was completed in late 2009.

Melanie Attard designed, produced and donated this badge. She writes:

I put this badge on my bag to get the message out that the planned dredging of Port Philip Bay by the Port of Melbourne Authority and the State Labor Government in 2009 would be a huge mistake. I didn't want to see our marine and coastal environment destroyed. I felt like I was trying to stand up for our environment.

This badge is important because to me it symbolises the community voice that often goes unheard and ignored when it comes to environmental issues. I would like other people to know that a large group of passionate people tried hard to stop the Port Phillip Bay dredging.