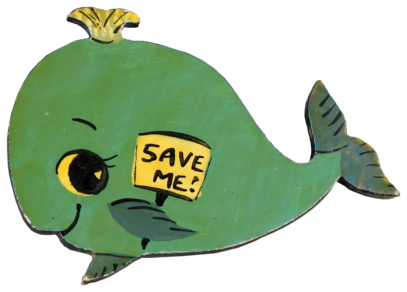 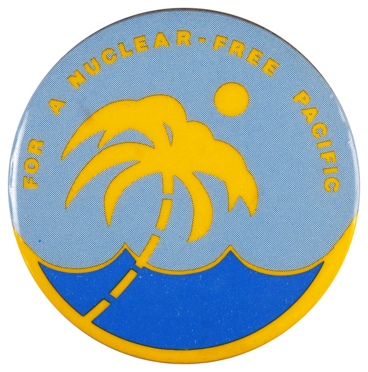 During the late nineteenth and early twentieth century developments in whaling technology, such as fast catcher boats, factory ships and explosive harpoons, saw an increase in commercial whaling activity. The deadly and efficient technology led to a rapid decline in the populations of several whale species.

In 1975 environmental group Greenpeace launched its direct action anti-whaling campaign, confronting whaling fleets at sea and putting themselves between the whalers’ harpoons and the whales. As public and political pressure mounted to save whales from extinction, the International Whaling Commission ordered a moratorium on commercial whaling in 1982, to take effect in 1986. The ban applies only to commercial whaling, with whaling for aboriginal-subsistence and scientific-research purposes still allowed.

The donor of this badge, Noelene Smith, writes:

I was studying Fine Arts at Alexander Mackie at various campuses in Sydney from 1977–80. I wore my badge every day to college and on other occasions. I purchased the badge at a market stand in Sydney. I wore the badge as I was of the view, even back then, that it was important to protect the whales and their environment … Like most uni students I felt I was having a say and supporting a cause by wearing my ‘cute badge’. In later years I wore my badge on a sun hat.

The badge is important to me as I thought I was making a statement and it is a fond memory of past youth.